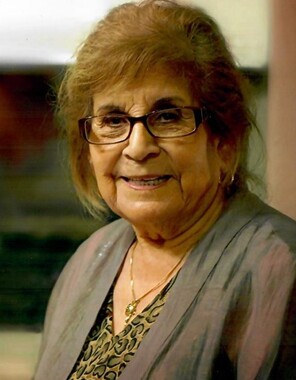 Back to Sofia's story

Sofia Herrera Garza, age 93 of Avondale, AZ died January 8, 2020, in Phoenix, AZ. She was born September 29, 1926, in Yoakum, TX to Margarito Herrera and Andrea Solis. On May 11, 1947, Sofia married the love of her life, military man, Benito G. Garza. The couple moved to Avondale, AZ in 1959. Sofia thrived in Avondale where she made many lifelong friends and helped to build a strong community. Her hobbies included sewing, gardening, and shopping. She was a loving wife, mother, grandmother, great-grandmother, and great-great-grandmother.
Sofia is survived by her daughters, Vickie Vizzerra (Carlos), Juanita Cruz (Santiago), Norma Castillo (Charlie), and Nilda Villa (Fernando); son, Ray Garza (Delia); 16 grandchildren; 23 great-grandchildren; and five great-great-grandchildren. She was preceded in death by her parents, Margarito and Andrea Herrera; and her husband, Benito Garza.
A visitation will be held at 9:30 am followed by a rosary at 10:00 am and a funeral mass at 10:30 am, Thursday, January 16, 2020, at St. John Vianney Catholic Church, 539 E. La Pasada Blvd., Goodyear, AZ 85338. The funeral cortege will follow in procession to Holy Cross Catholic Cemetery, 10045 W. Thomas Road, Avondale, AZ 85392. Condolences for the family may be left at http://www.thompsonfuneralchapel.com/obituary/sofia-herrera-garza/.
Published on January 15, 2020
To plant a tree in memory of Sofia Herrera Garza, please visit Tribute Store.

Plant a tree in memory
of Sofia