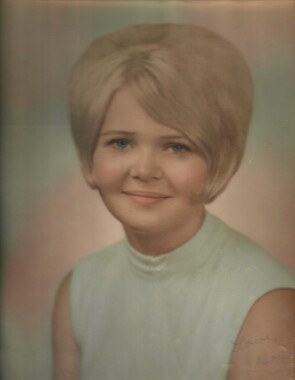 Back to Donna's story

Donna Kay Schlinger, age 68 of Tonopah, AZ died November 22, 2019 in Phoenix, AZ. She was born September 28, 1951, in Altoona, PA, to Jack and Agnes Miller Naugle. She graduated from Altoona High School. She met her husband, Edward Schlinger while she was a single mother living in Hampton, VA. After their marriage, Edward was stationed by the US Navy in Idaho where they lived until his discharge in 1985. They left Idaho Falls in a blinding snow storm and began their life in sunny Arizona.
Donna's primary career was that of homemaker, a role that she excelled in. She was an excellent cook and would often send plates of cookies, fudge, or peanut brittle throughout the neighborhood and even across the country to brighten the lives of family and friends. Her nightly meals were devoured by her family and her recipes were lovingly preserved to bless her family for generations.
She adored animals. Dogs, cats, fish, horses, goats, cows and chickens were all included in her household. She loved adventure and traveled to Alaska, Europe, Mexico and cruised through the Caribbean. She was passionate about Dodgers baseball. She was loving and caring to the core, still she was a realist and a straight talker. She knew exactly how to teach her sons and grandchildren to become the strong and conscientious individuals they are.
Donna is survived by her husband, Edward Daniel Schlinger; sons, Robert and Jack Frazier; sisters, Susan Frye, Diane Kerstetter, Sandra Nebelski, Sherri Herleman; brothers, Jim and Jerry Naugle; grandchildren, Kevin, Austin, Justin, Hannah, Kyle, Cody, Rylee and Simon; and great-grandson, Graesyn. She was preceded in death by her sister, Judy Naugle, brother, Jack Naugle, Jr.; and parents, Jack and Agnes Naugle.
A memorial service will be held at 4:00 pm, Wednesday, November 27, 2019 at Thompson Funeral Chapel, 926 S. Litchfield Road, Goodyear, AZ 85338. Condolences for the family may be left at www.ThompsonFuneralChapel.com.
Published on November 27, 2019
To plant a tree in memory of Donna Kay Schlinger, please visit Tribute Store.

Plant a tree in memory
of Donna

A place to share condolences and memories.
The guestbook expires on February 25, 2020.